US Markets – Maximum Point Of Indecision

Murphy’s law – in one of the most active trading weeks we’ve had in a long time, we’re entering the last day with the markets closing at the maximum point of indecision.

How the market closes today (Friday) will be very telling. Will the bulls go for the upside breakout to new highs or will the bears take control and start to push prices lower for a bit?

Lets start off by taking a look at a few charts… 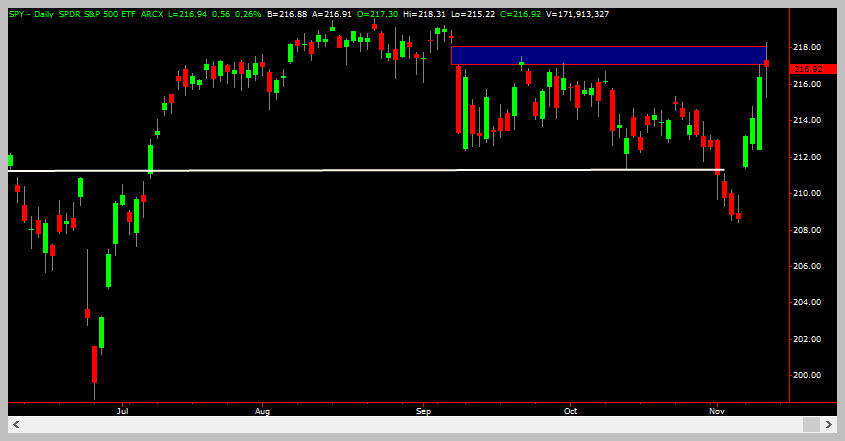 The above chart is the daily SPY.  Notice where price stopped today – right at the gap area from September’s down-flush. In common trading parlance we say that the price action “filled the gap.”  What isn’t shown in the chart is the volume – it filled that gap with volume that was even greater than yesterday.  In other words, the volume was tremendous.

If the bar that formed was a solid green bar, that volume would be a significant confirmation of the bullish case.  But, as it is, the bar that formed is more akin to a candlestick “doji” which is generally a sign of huge indecision when coupled with the kind of high volume we had on Thursday.

The Bulls and Bears were definitely fighting for control and no side really “won”.

Now, while the day session of the US stock market usually contains the most volume, relying just on the SPY (which is day session trading only) is probably not a good idea since that “gap” was caused by actual trading in the overnight session.  So lets take a look at the ES chart to see what we can infer from its price action… 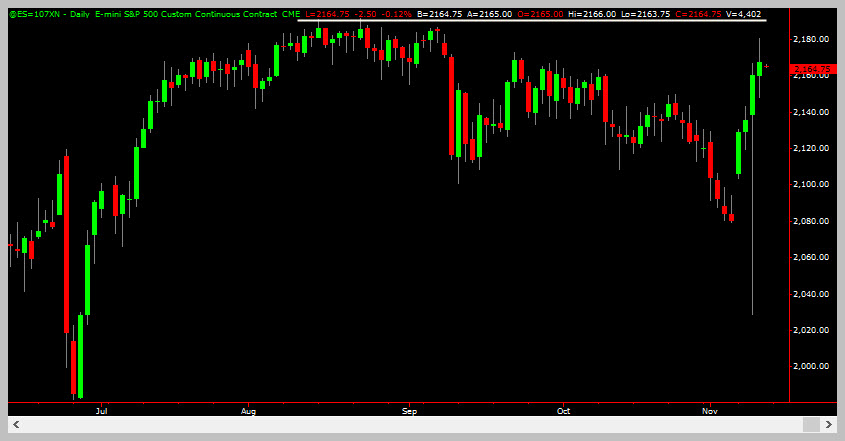 Well, the right hand side of the chart is still a mess but the bar that formed is also closer to a Doji than a straight-up bullish bar.  And it shows an up-bar.

So while the full 24 hour trading session showed a “doji” type bar in bullish mode, the day-only session showed a similar bar in bearish mode.  And its all happening right into resistance/prior highs.  Talk about indecision points.

Lighten up.  If price breaks out to new highs tomorrow or Monday, you can add back your position but the prudent thing to do now is to lighten up on all your long positions.

In the meanwhile, lets take a look at some other markets that are approaching key levels or may be ridiculously overbought or oversold…

Bond Futures (ZB or US) trading on the CME has flushed into a major support area.  This area is WIDE which means that this market can easily move another six points down ($6000.00 per contract) and STILL be in a support area.   Regardless, we believe that this swing down is close to completion and what will remain is going to be a wickedly large trading range! 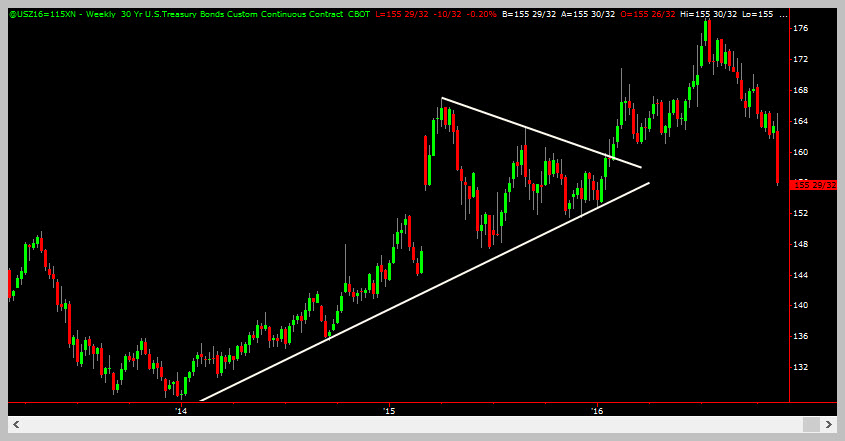 Copper looks like it had a buy climax today.  At the very least it’s close to the end of this swing – what a breakout!

Buy climaxes rarely end with a full reversal down – instead, just like bonds, you’re liable to end up in a trading range first!

Crude-oil is at the bottom of a trading range.

Now, I am not one to care about macro elements, not even the US elections. I just follow the charts.  But, a good reason for this range to break would be if President-elect Donald Trump opens up the spigot for US production of oil as he has said he would do. 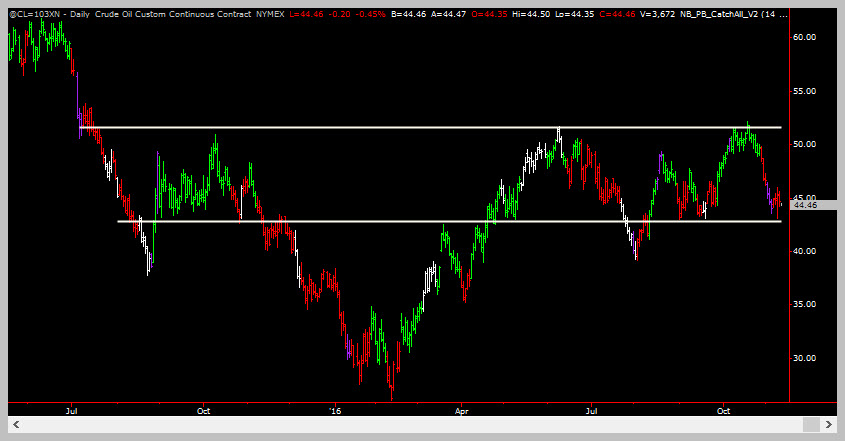 So, What’s The Trading Idea For This Edition?

The trading idea is to LIGHTEN UP on long positions.  Not all trading ideas in this newsletter will be about entering new trades – sometimes the best trading you can do is stand aside and let things unfold.  If you’re bullish there will be plenty of opportunity to jump on the train once the breakout occurs – there’s no reason to take above average risk just to be present at the begining of a breakout that might never come!

Learn The Right Way To Trade Breakouts And Breakdowns With Our E-Book: The Only Trading Technique You Will Ever Need 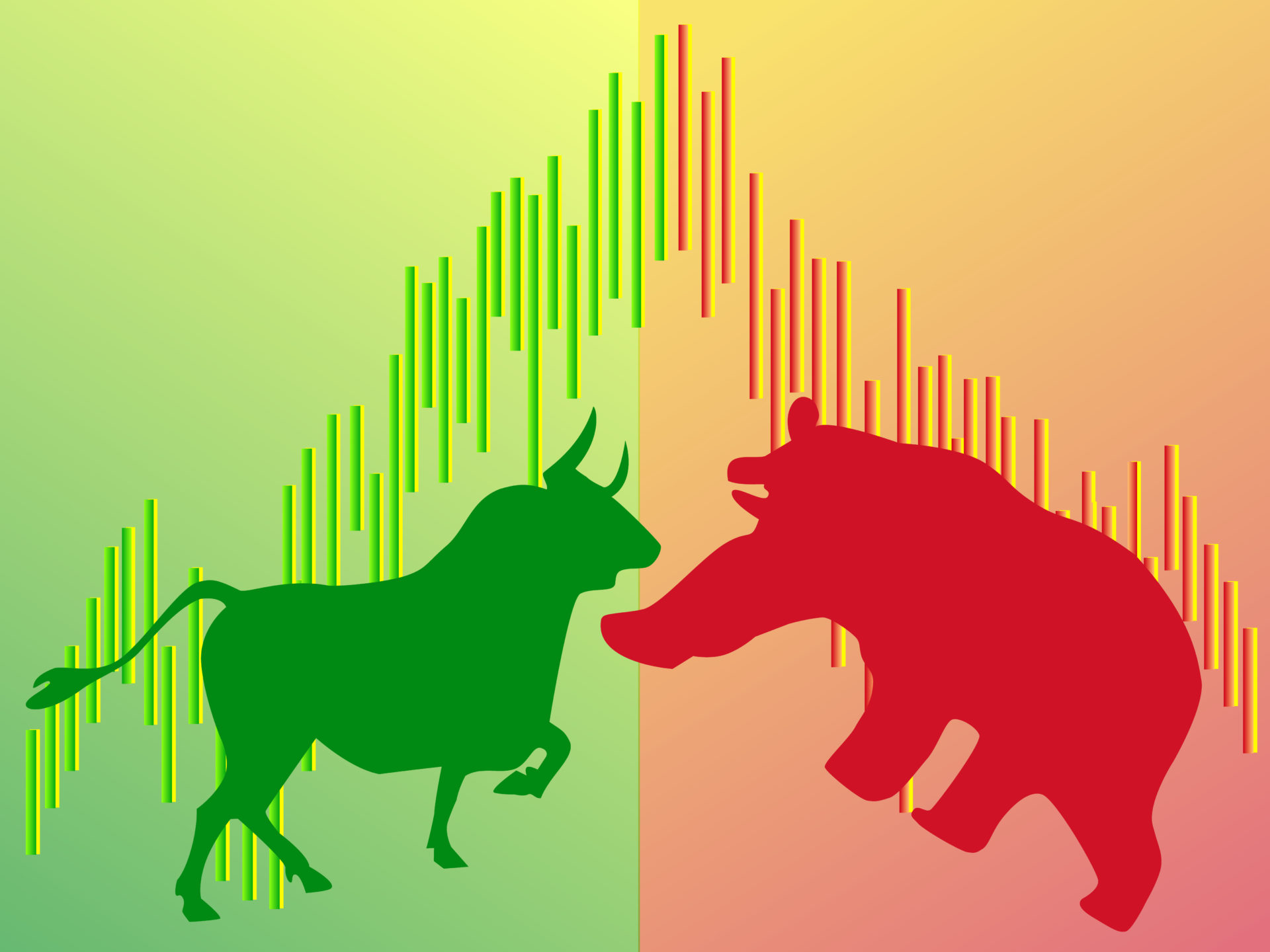 The broad US equity market (represented by SPY/ES) is close to new highs but closed with a clear indecision bar today.  Given that, we believe that the best thing to do is to lighten up on long equity positions and let the next leg assert itself before loading up again!